Above the lofty mountains the western sky is red,
Below, the sun sets on the peaceful valley.
A sparrow chirps at the wicker gate,
I return from a trip of a thousand li.
My wife and children shocked to see me,
Then calm themselves and wipe their tears.
I drifted through this disordered life and,
By chance I have survived its ordeal.
The neighbors lean over the wall and,
They too cry and weep.
Late at night we bring out flickering candles and,
Face each other like in a dream.

This is the first poem in a series of three written by Du Fu (杜甫) at the age of 45. The poems were written in 757 in a Qiang village (羌村) where Du Fu had taken his family as a place of refuge during the troubles of the An Lushan Rebellion.

Under threat by the rebellious General An Lushan in 756, the Imperial court fled the capital of Chang’an for Sichuan. In January of 757 AD, An Lushan was killed by his own son An Qingxu. At the fortress of Suiyang, the Tang forces fought to the death. Though the rebels won, the tide had turned in the war against the rebels.

Du Fu like other poets of the period was caught up in the troubles of the An Lushan Rebellion. At the time the rebels captured Chang’an, Du Fu had luckily been away, but he was subsequently captured and taken to the rebel held Chang’an. In 757, he escaped and made his way south to the court in exile. In September he was granted leave to see his family and his new son, Du Zongwu (Baby Bear).

Du Fu does not identify the Qiang village where his family lived. The Qiang people (羌族) generally refers to a small ethnic minority that lived in a mountainous region in northwestern Sichuan at the eastern edge of the Tibetan Plateau.

“Above the lofty mountains the western sky is red.” To the common people, red symbolizes good fortune and, it is believed, red lanterns ward off evil. Thus, our tiny Qiang village has the good fortune of being far from the war, but, as we shall see in poem 2, also suffers pain that accompanies war.

Hoeing grain at noon
Sweat dripping on the soil
Who knows, the food you eat
Grain by grain, is hard and bitter?

This post is a rewrite of Li Shen’s well-known poem about the plight of the Chinese farmer in the Tang dynasty.

Li wrote two poems on the subject of the Chinese farmer, for convenience sake, referred to as Ancient Airs 1 and 2. The second poem is often recited by children in their school cafeteria.

Li Shen (李紳, 772?-846) lived in the troubled decades following the An Lushan Rebellion (755-763). Even though the rebels were defeated, the damage to the countryside had been done, and there was no peace. Regional warlords rose up and court conspiracies challenged the emperor for control.

“Mǐn nóng (Pity the peasant )” was heard throughout the land.

Li had a long and distinguished career in the Imperial court, serving five different emperors, being made governor of various regions. In 837, while he was military governor of Xuanwu Circuit (in modern Henan province) China suffered a widespread locust infestation which somehow avoided his district. He was later appointed chancellor to the Emperor Wuzong.

In 844 he suffered a stroke and resigned.

Zhǒng 種 in the first poem means seed, and hé 禾 in the second, to cereal grain in general. Although Westerners jump to the conclusion that all Chinese eat rice (mǐ 米), actually it is noodles (wheat, kē 稞) in the north, and rice in the south. The fact that the farmers are hoeing suggests wheat.

Nóngfū 農夫 in the first poem meaning peasant, but also peasant farmer. The second poem is a children’s riddle. Some translators add farmer to the first line, but the poem simply starts with “Hoeing grain at noon,” building clue upon clue, until the child realizes the work and toil that goes into a plate of food.
lì 粒, the double lì lì, means grain by grain, each grain…
xīnkǔ 辛苦, separately, xīn meaning hard, implying with much suffering, and kǔ, bitter, together meaning, with much toil

As the moon falls from a frosty sky, a crow cries
On the shadowy banks in the River Maple, fishing boats glitter with torches
Outside Gusu city, at Hanshan (Cold Mountain) Temple,
On my boat, the midnight bell rings for me.

The frosty night was inky black

I was looking for a poem for November and came across this charming but melancholy piece by Tang poet Zhang Ji (張繼, 712-790). It reminds me of English poet, writer, and Anglican cleric’s great sonnet, For Whom the Bell Tolls.

His bronze statue can be found at the Maple Bridge in modern day Suzhou (Gusu). 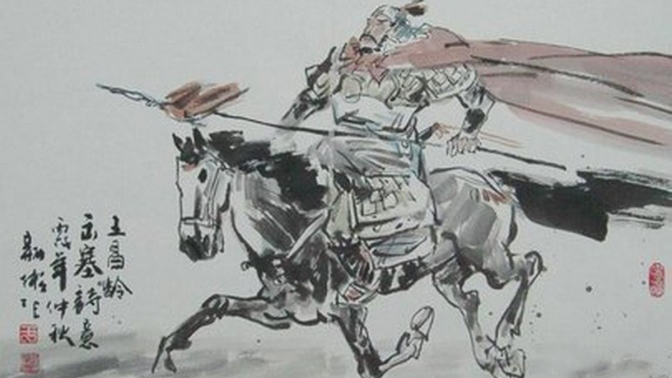